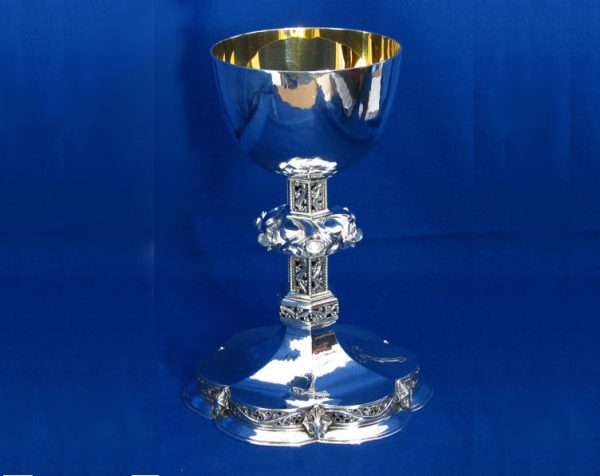 Description: This George V silver chalice is a representation of a master piece. The plain gilt- lined bowl is carried on a pierced hexagonal stem with central kop set with cabochon gem stones. The octafoil spreading foot is engraved with the figure of Christ curcified and the pierced border is applied with leaves.

This is a very fine piece of silver, the kind of unique piece that  doesn’t come along very often and is a  really lovely well crafted and unusual object in very good condition.  A  wonderful vintage item for ecclestiastic use or equally to use for display.

Burns Oates and Washbourne were located at 28 Orchard Street, London.  This business was founded by James Burns as Booksellers and Publishers in 1835, it was later styled as Burns & Lambert, and as from 1866, Burns, Lambert & Oates when William Wilfred Oates joined the company, and later still as Burns & Oates. The business passed to William Oates’s son, Wilfred, who was noted as being in partnership with Joseph Michael Hennessy, and as from 1885 the firm was in the hands of Hennessy alone. They were appointed Publishers to
the Holy See by Pope Leo XIII and towards the end of the 19th century they were complete church furnishers. It became Burns and Lambert, then Burns, Lambert and Oates and then Burns, Oates, and Washbourne before returning to Burns and Oates.  This piece has the makers mark of Burns, Oates & Washbourne Ltd, which was registered at the London Assay Office in 1923.

The following is an image of a catalogue issued by the company circa 1905.  The chalice featured on the cover of the catalogue is similar in many ways to the example offered here.